I loved Pushkar, home to Babas, gorgeous looking cows, and fun monkeys.  We were in Pushkar Oct-Nov 2018 as part of a year of travel.  I am writing a personal travel memoir.  Extract from draft book chapter:

In the masala dosa restaurant, my husband saw two older ‘hardcore hippies,’ you could describe them as, looking disdainfully at two younger travellers, apparently judging them.  We talked about our dear friend DW, one of the coolest people we know, but who outwardly looks perfectly ordinary.  But if you underestimate him, more fool you.  He doesn’t care.  He is not interested in so-called cool people identifying him.  ‘Style is saying who you are without words,’  is an often quoted phrase.

It’s a tempting idea, but it doesn’t work for me.  ‘Saying who you are without words’ usually means just emphasising the cool aspects.  So I’d emphasise the writing, go about all in black with a sleek laptop and a cool Moleskine notebook?  Or emphasise the yoga, the meditation and the spirituality?  Why not emphasise my anxiety or OCD?  Show it all.  Or none of it.  Be plain, and more fool people if they write you off based on that?

In Pushkar I read a blog post by Adie about therapy, about the ‘places’ we inhabit.  The place where everything is bad and nothing is good.  The place where everything is good and nothing is bad; ‘unicorns farting rainbows.’  People who get into spirituality can get stuck there.  The functional place is the ‘And And place,’ not all good, not all bad.  Our friend at the guesthouse said that on the television news everything awful is reported, all the hideous crimes from all over India.  He said that he watches it all, to know that there is bad. ‘I know there is everything,’ he said.

For a couple of nights our neighbours were a young Indian couple, they played music loud at midnight, one am.  ‘They do that thing that young people do, not playing a whole song,’ as my husband said, making it more annoying.  The guesthouse staff told them to be quieter, he said to us, ‘I told them, the British, they like to go to sleep at 9.30!’  Which wasn’t true but it was quieter after that!

At the same time, Des* on WordPress wrote post about how his daughter aged twenty five had phoned up to tell him that she listened to a whole Beatles album all the way through and that she understood the context, the time, etc, from listening to the whole album rather than single songs.  Des wrote that it was unusual for a young person to listen to a whole album, and that individual songs apparently only have a 48% chance of being listened to all the way through!  I hadn’t really realised it was ‘a thing’ until then, although once I started thinking about it I realised that my stepdaughter did the same.

The next evening my husband and I went to a nice restaurant for what felt like a date night, just beyond where the women sold beaded jewellery on the pavement.  There was a green garden with lights, and unusually they had alcohol and eggs openly on the menu.  I had two mojitos and a whole pizza made in a wood oven (no cheese).  They played REM- Automatic for the people, they played it all the way through.  I used to have that album and listen to it a lot.  It has the track Everybody Hurts, which was a real life call back to Sick and Tired in Delhi.  Then they played The Beatles Help all the way through too. 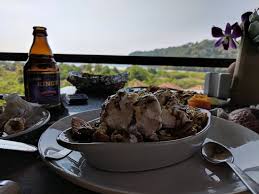 Everywhere we went in India we had seen a dessert called ‘Hello to the Queen’ on the menu.  Once in Kerala we did look up what it was- biscuit, toffee, banana, cream and ice cream- but we had never succumbed to temptation.  In Kerala I had read that India said it was Israeli, Israel denied it.  I wondered, why deny such a wonderful thing, why not want to say you’d invented it, like the pavlova rivalry of Australia and New Zealand?  But it’s not in Israel, it’s only in India.  Like Gobi Manchurian, sometimes called Gobi 65, an Indian interpretation of Chinese food, not found in China, or indeed anywhere outside India.

I read two versions of the creation story, one, I’d read when we first looked up what it was in Kerala, was that an Israeli chef had been smoking marijuana and got the munchies, and invented this dessert!  The second I read in Pushkar sitting in the mojito restaurant, where it was also on the menu, and I wanted to refresh my memory.  The one I found then was slightly different, it said it was an Israeli customer who asked the chef to bring this, add this, add this and this, and ‘Hello to the Queen’ was born.  Best of all, on this version, it said it was invented in Pushkar!

By this time, we’d decided to abandon our vegan principles for one night and try it, just once.  ‘Wow,’ I said, ‘how amazing, that when we finally decide to give in and try it, we are in Pushkar, where it was invented!’

I still think it was amazing that we decided to give in and try it while we were in Pushkar, but it’s perhaps not such surprise that it was invented there, given that Pushkar is very popular with Israelis and has lots of marijuana!

We ordered one Hello to the Queen and one pancake with banana and Nutella to share.  It didn’t disappoint.  On the way home I bought Dark Fantasy biscuits (our regular near-as-dammit vegan biscuits) AND a family size bar of Dairy Milk (which most certainly is not.)  When I fall off the wagon, I really fall off it.  ‘Everything’s a gateway drug for you,’ my husband said, referring to my descent from mojitos to cigarettes to chocolate…

*Also check out this post by Des The beginning and end of a survival blog, inspirational and a great read

Sold house left job decluttered almost everything else.  With husband went travelling for a year, mostly in India.   Here are my India highlights.  Now back in the UK and living on a narrowboat.  Writing a book about everything…

For more photographs of the trip see Instagram travelswithanthony